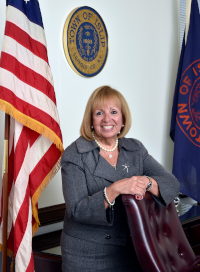 Angie Carpenter is a public servant whose impact resonates well beyond her role as Islip Town Supervisor. Even prior to being in government, Angie was always an extremely active member of the community. When her sons were young she was involved with Little League, Boy Scouts and PTA, of which she is a lifetime member. In the late 1970’s and 1980’s she actively sought options to help “latch key kids.” She and other concerned citizens worked together to come up with solutions leading her to become a founding member of both the YES and ASKUS programs, two programs that provide after school activities and educational opportunities for school children.

In addition to the volunteer work that Angie has done over the years with children, Angie is a member of the Salvation Army Advisory Board, past President of the Board of Our Lady of Consolation, and former chair of the Catholic Health Services Continuing Care Board, and Vanderbilt Board of Trustees. She also served as President of the West Islip Chamber of Commerce for many years, and formed the Town-wide Chamber of Commerce Council, which united Chambers throughout the Town.

After being elected to the County Legislature in 1993, Angie served on almost every legislative committee, where her leadership generated county-wide initiatives in public safety, education, economic development, consumer protection and cultural affairs. She was elected unanimously to serve as the Legislature’s Deputy Presiding Officer for 2 consecutive years.

Angie’s experience owning a business was invaluable in helping to draft the County’s annual $2 billion+ budget during her years in County Government. She worked to bring Touro School of Health Sciences to downtown Bay Shore, and worked tirelessly to increase aid to Suffolk Community College. Additionally, she helped implement a mass transportation public information program, enacted a Linked Deposit Program to promote local business expansion, directed the County Health Department to provide free testing for prostate cancer, and worked with local breast cancer coalitions. She was also instrumental in the acquisition and preservation of Sagtikos Manor in Bay Shore as a historic landmark, and improvements at Gardiner County Park.

In November 2005, Angie was elected by the residents of Suffolk County to serve as County Treasurer. As Treasurer she worked aggressively and increased interest earnings with all designated depositories, and recommended changes to the State’s Real Property Tax Law.

On March 1st 2015 Angie Carpenter was sworn in as the first woman Supervisor of the Town of Islip in its more than 300 year history, to fill the vacancy of Islip Town Supervisor, created when Tom Croci was elected to the New York State Senate. She brings more than twenty years of government experience, coupled with her extensive financial knowledge, and was thrilled to come home to Islip and work to improve the community she loves so much. As expected, Angie hit the ground running embracing the challenges and working on new ideas to make Islip an ever greater town for people to do business, raise a family, and enjoy the many wonderful available amenities.

In November 2015, Angie was elected by the residents of the Town to serve four more years as the Islip Town Supervisor. Angie will continue to engage residents to work together to revitalize the airport, promote business, and increase efforts to ensure that the needs of all Islip residents are met in a cost effective, and compassionate manner.