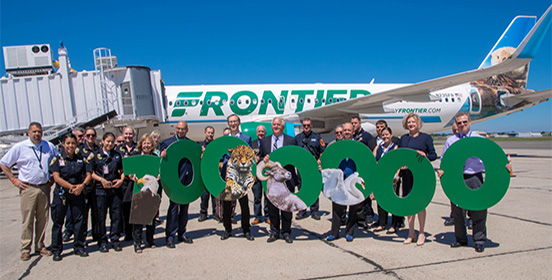 June 26th, 2019– Less than two years ago, Frontier Airlines’ first flight touched down at Long Island MacArthur Airport (ISP). On June 26, 2019, the airport, the airline, the Town of Islip, customers, and the community gathered to celebrate another Frontier milestone.

“We’re very excited to celebrate one million passengers in Islip,” said Daniel Shurz, Frontier Airlines senior vice president of commercial. “Since beginning service at Long Island MacArthur Airport in 2017, Frontier has grown its presence at ISP steadily and now offers eight non-stop routes. We are incredibly appreciative of the remarkable support from the community and our outstanding airport partner. We look forward to continuing to grow our ‘Low Fares Done Right’ service in Islip.”

“We greeted Frontier’s very first flight at MacArthur Airport with a water cannon salute, and we have been working with them in a positive way ever since,” said Angie Carpenter. “The result is new destinations, travel options, and jobs for the region. Frontier offers a variety of choices for passengers traveling from our area, and also boosts local tourism as we welcome visitors to discover all Long Island has to offer,” she said.

Kevin S. Law President & CEO of the Long Island Association: “MacArthur Airport spurs economic growth and creates jobs for the entire region, and thus I commend Supervisor Carpenter for her leadership and congratulate Frontier Airlines’ on serving its one millionth passenger.”

Frontier Airlines is an innovative growth carrier with nearly 200 new airplanes on order. Frontier currently flies the youngest fleet in the industry, comprising over 85 Airbus A320 aircraft. The airline was founded in 1994 and is headquartered in Denver, CO. Frontier serves over 100 destinations in the US, Canada, Dominican Republic, and Mexico, in addition to New York’s ISP, bringing many new options to Long Island.

Frontier’s newest nonstop city from MacArthur Airport is Raleigh-Durham, which launched April 30, 2019. “Raleigh-Durham is an important technology and research destination, and home to top universities, just like Long Island. This new option provides convenience for our business community and value fares and promotions for those looking to visit family and friends,” LaRose-Arken added.

“We’re excited to offer MacArthur Airport customers so many ways to create unforgettable memories this summer,” said Shurz. “Our fares make travel more accessible and affordable and makes it easier for people to fly more often,” he added.