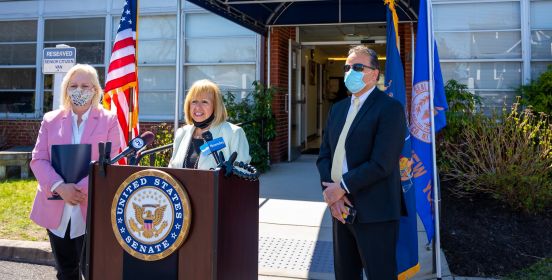 Over the years, prescription drug costs have become increasingly unaffordable, particularly for older Americans — who account for one in six Suffolk county residents — who rely on Medicare, yet still struggle to afford medications on a fixed income. Additionally, many people with disabilities rely on drug therapies to manage chronic conditions but have been overwhelmed by increasing prices. Drug manufacturers continue to spike the price of their drugs despite one in four Americans unable to afford their medications. Nearly a third of adults say they have not taken their medicine as prescribed in the past 12 months due to costs.

“Even with help from Medicare, the portion of prescription drug costs that seniors are responsible for can be overwhelming on a fixed income. Nearly nine out of ten older adults take prescription medications and a quarter of them say it is difficult to afford them. This is a health crisis for our older adults – who account for one in six Suffolk County residents – and addressing it is one of my top priorities as a member of the Aging Committee,” said Senator Gillibrand. “That is why I am fighting to pass this package of three bills to help us reduce the cost of prescription drugs and make sure that everyone can access the medications they need.”

“As we continue to face this COVID 19 pandemic, it is important now more than ever, that anyone who needs medication has the opportunity to obtain it, affordably,” said Islip Town Supervisor Angie Carpenter. “There are more than 73,000 residents over the age of 60 in the Town of Islip. Mental and physical well-being are essential to a person’s quality of life, and we have a responsibility as elected officials to provide this opportunity, regardless of an individual's income,” said Supervisor Carpenter.

“People with disabilities and the senior community are the largest groups of Americans needing the benefits of Prescription medication. And yet we all struggle financially to attain them consistently — sometimes placing our lives at risk because we have to meet other financial needs. This package of legislation will help towards that end and provide us with the means to remain independent living in our communities. Thank you, Senator Gillibrand, for moving forward this vital piece of legislation.” - Suffolk Independent Living Organization (SILO), Chief Executive Officer Joseph M. Delgado

Under current law, the secretary of HHS is prohibited from negotiating lower drug prices on behalf of Medicare Part D beneficiaries. In contrast, other government programs, like Medicaid and the Department of Veterans Affairs (VA), are allowed to negotiate. According to a recent report by the Government Accountability Office, Medicare paid twice as much for the same prescription drugs as VA in 2017.

In 2020, five of the largest pharmaceutical companies in the U.S. made $44.9 billion in profits. That same year, in the midst of a twin public health and economic crisis, drug makers raised their prices of more than 860 prescription drugs by 5%, on average. In 2018, the average annual cost of therapy for widely used specialty drugs was about $79,000. This is more than twice the median income for people on Medicare and more than three and half times the average Social Security retirement benefit.