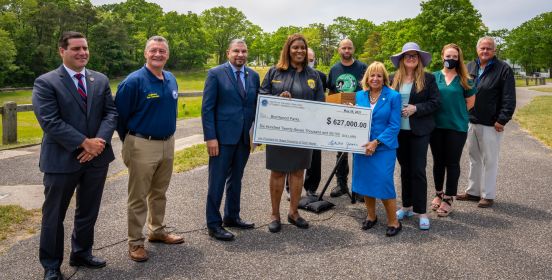 May 26th, 2021 – New York Attorney General Letitia James was joined by Islip Town Supervisor Angie Carpenter today to announce that the AG's office has delivered $627,000 from 8 companies involved in the illegal dumping of contaminated construction waste in Roberto Clemente Park in Brentwood, Long Island. These agreements — which will be sent to the U.S. District Court for the Eastern District of New York for final approval — are the first resolutions reached in a federal lawsuit the Office of the Attorney General (OAG) brought in 2017 against 33 construction contractors, waste brokers, and waste haulers that illegally dumped waste in the park for years. The agreements seek to hold these companies and individuals financially liable for the Brentwood community’s lost use of the popular park during the three years it was closed for cleanup.

The funds will be used to improve public park facilities in the Brentwood area, including Roberto Clemente Park. The OAG will work with local community groups, elected officials, and the Town of Islip to engage residents in identifying community priorities for restoring and enhancing Brentwood parks.

“The threats of environmental injustice are real and have unfairly plagued communities like Brentwood for too long,” said Attorney General James. “For over three years, Roberto Clemente Park was used as an illegal dumping grounds, robbing residents of the centerpiece of this community and putting our children in harm’s way. Today, we begin to give back what’s long been due, and hold accountable those responsible for polluting this park with dangerous chemicals. My office will continue to crack down on those that seek to take advantage of our diverse communities and will ensure that every New Yorker has access to the safe parks and natural resources that they deserve.”

Between August 2013 and April 2014, tens of thousands of tons of urban soil and construction and demolition debris (C&D) transported from construction sites in the New York City metropolitan area were illegally dumped in Roberto Clemente Park, a park owned by the Town of Islip. The Town closed the park in May 2014 when environmental testing revealed the presence of asbestos, and, later, a wide array of toxic chemicals, heavy metals, and pesticides, in areas of the park where the dumping occurred. The park remained closed until July 2017, as cleanup contractors removed approximately 39,000 tons of construction waste.

In May 2017, OAG sued the companies and individuals related to the dumping — contractors who arranged for the disposal of soil and C&D contaminated with hazardous substances from construction sites in the New York City metropolitan area, companies who brokered the removal and disposal of the contaminated waste, and the haulers who transported waste to Roberto Clemente Park and dumped it there. That lawsuit sought damages under the federal Comprehensive Environmental Response, Compensation, and Liability Act (CERCLA) and state public nuisance and negligence laws for the Brentwood community’s lost use of the park during its cleanup.

The agreements and related payments announced today resolve the lawsuit brought by OAG against the following companies:

The legal actions against the 25 other companies and individuals named in the federal lawsuit remain ongoing. Funds obtained through the continuing litigation will also be directed towards the enhancement of Brentwood-area parks.

In 2016, the Town of Islip initiated a separate legal action against a number of companies and individuals involved in the dumping. The Town has reached agreements for $145,000 for the park’s cleanup with two of the same companies that the state has now settled with. Attorney General James thanks the New York State Department of Environmental Conservation for its assistance in this matter.

“On behalf of the members of the Islip Town Board and our residents, I applaud Attorney General Letitia James for her unwavering commitment to hold these companies accountable, and for ensuring that restitution be made. Although the illegal dumping at Roberto Clemente Park proceeded AG James’ tenure, as it did mine, the AG has remained steadfast in her pledge to make the community whole,” said Islip Supervisor Angie Carpenter.