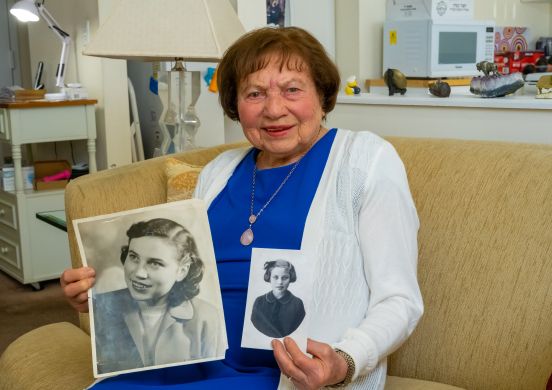 April 29th, 2022 – The Town of Islip Unity Council held its inaugural “Lunchtime Speaker Series,” with a compelling presentation and Q & A from Holocaust survivor Edith Gross, of Oakdale. The event marked the debut of the Council, a restructuring of the Anti-Bias Task Force, reframed to better focus on inclusivity, diversity, equity and accessibility (IDEA) in the Town of Islip.

Islip Town Supervisor Angie Carpenter and Rabbi Shimon Stillerman of the Chabad of Islip, had the privilege of inviting Edith Gross, 93, of Oakdale, to address the audience of school, library, chambers of commerce and civic organization representatives in the Islip Town Board Room Thursday, in commemoration of Yom HaShoah, Holocaust Remembrance Day.

Edith recalled her life story, beginning with the early years as a small child in Czechoslovakia. Around the age of two, her father traveled to America, leaving Edith and her older siblings to be raised by her mother. In 1939 the war broke out, with Hungarian forces occupying Czechoslovakia and stripping Jews of their businesses. That same year Edith’s mother died. Edith was 10.

In 1944, German forces reached Gross’ Czechoslovakian village. Jewish citizens were required to wear yellow stars on their clothing, and were moved into ghettos where hundreds of families were corralled into small living quarters without basic necessities. Edith and her family remained in the Sevlus ghetto until they were transported by cattle cars to Auschwitz by Nazi soldiers. Jewish citizens were forced to travel 70 to 80 people per car, and were not provided with food, water, or even the ability to move freely or lie down.

Once Edith arrived at Auschwitz, she was separated from her brothers but was able to stay with her sister. Edith and her sister were moved to a barrack where they were subjected to deplorable living conditions, and barely fed food or water. On the fourth day, the sisters were transported again by cattle car, this time to Krottingon labor camp in Lithuania.

At the labor camp, Jewish women were sent to work as seamstresses or boot makers. German forces created quotas that the enslaved women had to meet in order to stay alive, and Edith worked quickly in order to compensate for her ailing sister. Edith recounted at the labor camp, they were given enough food and water to sustain the tedious work. On her 16th birthday she recalled a soldier who overheard her talking to another Jewish woman about her birthday. The soldier took Edith to the kitchen where she was given a large bowl of boiled potatoes and two slices of buttered bread, which Edith shared with her friends at the camp.

The sisters remained there for four weeks until word spread that Russian forces were approaching. This time, the sisters were sent to Stutthof Concentration Camp in Poland, and continued laboring as seamstresses and bootmakers fixing Nazi uniforms. Edith recalls almost losing her faith at Stutthof after witnessing atrocities at the hands of the German soldiers.

Days before Jewish prisoners were sent on the death march to Danzig, Edith’s ailing sister died. As Russian forces were quickly approaching, Stutthof was emptied of all living captives. Liberation was imminent. 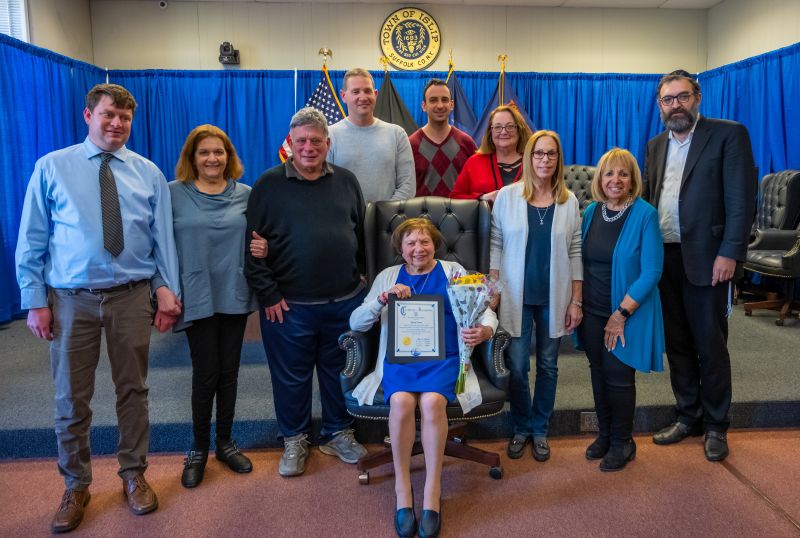 Edith returned to Czechoslovakia and found her home destroyed. She then planned to join survivors of the Holocaust on the trek to Israel. When she arrived in Greece, Edith received word that her father had secured papers for her travel to America.

Edith quickly assimilated to life in America; she learned to speak English and found employment working with American Express. Edith later married and was blessed with two sons. She now lives in Oakdale, and is a proud grandmother and great grandmother.

Holocaust Remembrance Day is an internationally recognized day corresponding to the 27th day of Nisan, the first month on the Hebrew Calendar, and marks the anniversary of the Warsaw Ghetto Uprising, a 27-day resistance against German forces. The Ghetto Uprising was the largest and most symbolic act of Jewish resistance during World War II, and inspired uprisings in other ghettos such as in Bialystok and Minsk.

“Your profound message of love and caring for one another transcends mankind. I know I speak for everyone Edith, that we will never forget what we experienced today,” said Supervisor, Angie Carpenter.

“We meet many people in our lives, many wonderful people,” said Rabbi Shimon Stillerman, Chabad of Islip. “But then there’s a category of people that we connect with, maybe a handful in our lifetime who truly change our life, making it more meaningful. Edith Gross is someone who I am so honored and blessed to have met…someone that I can say since meeting her, my life has become a lot more meaningful,” said Rabbi Stillerman.

Holocaust Remembrance Day serves to commemorate the actions taken by Holocaust survivors in the years immediately following the devastation of the Holocaust to reclaim their rights, history, cultural heritage, traditions and dignity, and plays a vital role in the ongoing education against intolerance and injustice.

Please reach out to Rabbi Shimon Stillerman of the Chabad of Islip at This email address is being protected from spambots. You need JavaScript enabled to view it. to arrange a speaking engagement with Edith Gross.