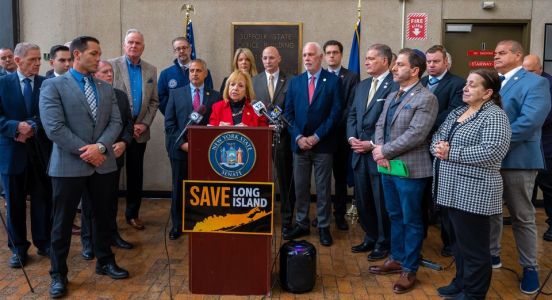 January 23rd, 2023– Hauppauge, NY – Republican State Senators, Assembly Members, Suffolk County Legislators, and Town Supervisors from across Suffolk County joined Eric Alexander, Director of Vision Long Island, and The Building and Construction Trade Council of Nassau and Suffolk Counties to call on the Governor to stop government overreach and put a halt to her misguided housing proposal that would subvert local control.

The delegation stressed the importance of villages, towns, and cities having the ability to govern their municipalities and create local zoning laws, grant building permits, and urban plans based on the unique needs of the communities they serve. Local municipalities should have the ability to develop localized development plans for infrastructure and housing without the fear of the state stepping in to supersede local laws.

Smart development must address local infrastructure concerns, such as the lack of an efficient, wide-spread sewer system, environmental concerns that are unique to Long Island, and affordability, so that the costs do not fall on already burdened residents who are struggling with skyrocketing costs of living. These issues are best addressed locally, not with a heavy-handed top-down approach from the Governor.

“To find the perfect example of the Town of Islip’s commitment to affordable housing, one needs to look no further than Carleton Park in Central Islip. Drug dealers once controlled the streets. Police wouldn’t enter the dead-end streets without escorts. A new community of 375 units of affordable homeownership was created, and recognized on the floor of Congress. Children were playing on the same streets where gunfire once rang out. Towns can do this. It’s welcomed by the civics. It’s welcomed by the people who live and work locally. Throughout the Town of Islip, and in conjunction with the opinion of planning experts, we’ve created housing opportunities in a responsible manner by being responsive to the community. I’ve spent nearly my entire life here, fighting for all of us here in Islip Town. Now we’re under attack-NYS attacking our right to govern ourselves, decide what our neighborhoods look like, to turn us into the city. I will not let that happen. Home Rule is what it’s all about-Home Rule is what the people want and deserve.” said Islip Town Supervisor Angie Carpenter.

“Under Governor Hochul’s plan, every town, village and county overnight would lose the important zoning protections that keep them from looking like the crowded neighborhoods of the Bronx, Queens and Brooklyn. That’s not what the residents of Brookhaven Town want. This wrongheaded plan will not solve our affordable housing plan, but it will devalue the homes and quality of life in our neighborhoods.” said Brookhaven Town Supervisor Ed Romaine.

“The Governor’s ill-conceived proposal tramples on municipal home rule and local zoning. Moreover, the potential effect on our school districts, the environment and our communities would be staggering. In Brookhaven we have worked and achieved a great deal of transit-oriented development to support an increasing variety of housing stock. We achieve this by working with our communities, respecting the law, upholding home rule and established single family zoning. We join with our colleagues in other towns and villages across Long Island in calling on the Governor to withdraw this proposal immediately.” said Councilman and Deputy Supervisor of the Town of Brookhaven Dan Panico.

“This is putting the cart before the horse in every aspect. In addition to the gross overreach by the State, overruling local government development ordinance, will result in bleak environmental impacts. Bottom line you can’t add more population to the area without the proper infrastructure and waste water management in place first. Municipalities will bear the responsibility and burden of this legislation and as such, local government should have a seat at the table for any and all legislation moving forward.” said Smithtown Town Supervisor Ed Wehrheim.

“Every Long Island community has its own unique identity. Solutions to the Long Island housing needs to be addressed by each unique community. The only way that can happen, is if solutions are created through local governments addressing the particular needs of each community. There is no “one size fits all” solution to every housing problem. Therefore, ideally the State should continue to work with each local government regarding housing needs.” said Riverhead Town Supervisor Yvette Aguiar.