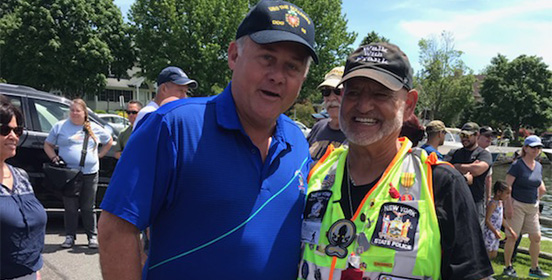 June 11th, 2019 – On June 8th, 2019, Town of Islip Councilman John C. Cochrane, Jr., in the company of Mayor John Valdini, members of the Village of Brightwaters board and supporters of our military and veterans, met at the Brightwaters Canal to celebrate life-long Town of Islip resident Frank Romeo, as he approached the final stretch of his 750 mile walk across New York State, completing the mission he set out on in late winter.

On March 1st, 2019, at the age of 70 years old, Frank, a decorated Vietnam Veteran and one of the longest living veterans diagnosed with 100% post-traumatic stress disorder (PTSD) related disabilities, began a 750-mile trek across the State of New York, advocating for veterans issues and the awareness of PTSD, suicide and homelessness. Frank and his supporters walked through sub-zero temperatures, 85 mph winds, rain, sleet and snow, traversing bridges, tunnels and countless roads on his journey across 25 NY counties. Beginning in Buffalo, NY, Frank visited veteran homeless shelters, outreach centers and facilities, speaking with veterans about his own fifty-year battle with PTSD and educating the public on the realities of war.

“Frank is a perfect example of the will, determination and strength of our Nation’s past service members. His noble mission is a reminder to us all, that we can and will do better to care for our returning Veterans,” said Councilman Cochrane. “We are proud to have him as a Veteran, educator and resident in our Town,” said the Councilman.

Frank Romeo has been traveling the U.S., educating students on the devastating impact post-traumatic stress disorder (PTSD) has on our military Veterans and society, for over thirty years. On June 8th, 2019, Frank Romeo culminated his walk at Bay Shore H.S., where he has worked to initiate a new curriculum in Social Studies aiming to study the experience of the American Soldier alongside the study of policy, battles and major wars.

To learn more about Frank Romeo and the Walk with Frank Initiative, visit walkwithfrank.org.