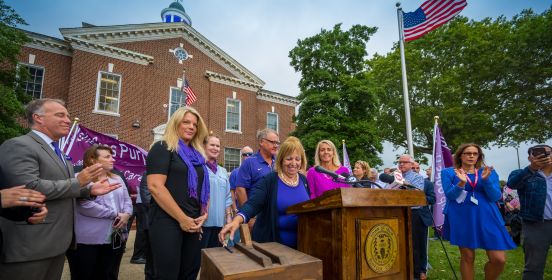 September 27th, 2019 – Islip Town officials kicked-off “Islip Goes Purple” Thursday, demonstrating the Town’s unity in memory of the lives lost, those in recovery, those struggling and the Islip families affected by the Opioid/Heroin crisis.

More than 100 people gathered for the inaugural event, including residents, local elected officials, school superintendents, principals, officials, hospital administrators, business owners, merchants and community leaders, showing their support for those whose lives have been affected by addiction.

“The Opioid and Heroin crisis does not discriminate. It affects everyone, regardless of economic or social status. There have been 21 deaths in the Town of Islip this year thus far. The majority were males between the ages of 30-39 years old. In 2018 in the Town of Islip, Fire and EMS agencies responded to 1,344 overdose-related 911 calls,” said Islip Supervisor Angie Carpenter.

“The merchants and business community in our downtown have shown tremendous support for this cause,” said Supervisor Carpenter. “The purple flags on our streetlamps and the purple lights in our storefronts are testament to our Town’s commitment that our residents are not alone, and we are UNITED,” added the Supervisor.