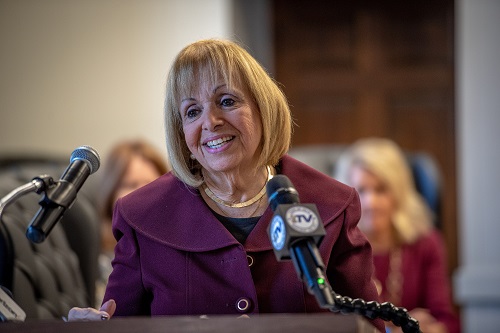 Watch the full State of the Town Delivery

March 19th, 2019 – Islip Town Supervisor Angie Carpenter this morning delivered the State of the Town address, focusing on the Town’s future, as well as shedding light on previous accomplishments. The address, entitled “A lot has been accomplished-but there is a lot more to be done!” made reference to the achievements throughout the Town during the Supervisor’s first four years in office, but concentrated more so on the Supervisor’s future plans for the Town of Islip.

The Supervisor made reference head-on in the address of her biggest challenge thus far, Roberto Clemente Park. “When I first came to the Town, we were reeling from the desecration of the park by unscrupulous contractors. After the orderly removal of forty thousand tons of debris, the park now boasts a brand new pool, refurbished bathrooms, and a changing building, new landscaping, sunshades and lounge chairs. Additionally, a spray park, similar to the very successful Pirate’s Cove in Bay Shore will hopefully be completed this summer, and a long-awaited skate park is now in the design phase,” said the Supervisor.

The successful remediation of Clemente set the tone for the “We” theme referenced throughout the Supervisor’s address, illustrating the partnership among different levels of government, community partners and advocates working together to turn one of the darkest moments in the Town’s history, into one of their greatest accomplishments. The Supervisor referred to Islip MacArthur Airport as another example of this partnership. The airport, once a shell of its former glory days, is now the fastest growing “hub” airport in the country. Recent data shows the number of seats at MacArthur has grown from 1.70 million in 2017 to 2.17 million in 2018, a 27.6% year-over-year. “With the hard work of all those at the airport, together with the Airport Advisory Board, and most importantly, the public who use our convenient, well-maintained regional asset, Long Island MacArthur will continue to add airlines and routes that meet the needs of all of Long Island,” she said.

When speaking of the Town’s finances, the Supervisor noted that previous administrations in the Town had raised taxes 28% without solving underlying problems. Putting together a volunteer team of knowledgeable financial experts, coupled with her own experience as a former County Treasurer, the Town mapped a way forward. The Town enjoys an Aaa Bond Rating from Moody’s Investment Services, which has been reaffirmed three times. “The approximate savings because we have earned this Aaa rating is $1.5 million. It allows us to maintain and improve our facilities and not have to increase taxes to do so,” said Carpenter.

Looking ahead, most notable was the $10 million grant awarded in 2018 to Central Islip--chosen among 23 other municipalities vying for the award--through the Governor’s State Downtown Revitalization Initiative program, after two failed attempts in 2016 and 2017. “We didn’t give up. We knew that it was an area of the Town that with the award of this grant, was poised on the brink of great success. A once failing part of our town is poised to become a vibrant downtown with restaurants, businesses and facilities for the arts and recreation that all can enjoy. There is no better example of the power of “We,” remarked the Supervisor.

A new Animal Shelter, marina rehabilitation, an increased paving budget, an Opioid Task Force, the replacement of 17 parks throughout the Town, Green Initiatives and a team of forward-thinking public safety administrators, along with the unveiling of a new Town of Islip website, were all highlighted as coming down the pike, newly formed or ongoing improvements. “There is still a great deal to do. Fortunately, we have the ideas and plenty of energy. With the partnership of my fellow Town Board members, the hard work of all of our professional and caring commissioners; and with the participation and support of our Town residents, we will continue to accomplish great things for our great Town of Islip,” the Supervisor concluded.