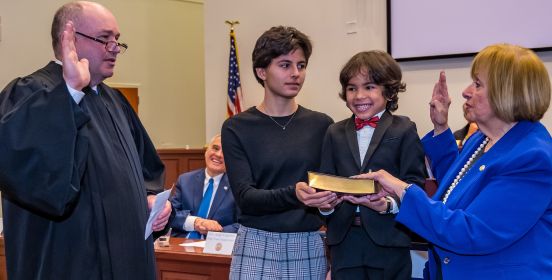 Supervisor Carpenter, Town Board Sworn In to Offices

Congressman Peter King emceed the ceremony, paying tribute to the Supervisor and the Town Board for their stewardship of the Town of Islip, the third largest town in the State of New York. NYS Comptroller Tom DiNapoli and Suffolk County Executive Steve Bellone praised the Supervisor for her bipartisan track record of accomplishment throughout the Town and across the political aisle. In her remarks, the Supervisor thanked Senator Phil Boyle and Assemblyman Phil Ramos, among other elected officials, for their support in working hand-in-hand to create a quality of life for all residents.

The Supervisor acknowledged community groups, fire departments, boards, commissions, chambers of commerce, cultural and civic groups, historical societies, neighborhood watch groups and the newly formed Town of Islip Parks Foundation. “We have an incredible team, and the Town of Islip residents have accepted the challenge to step up and be a part of that team. They have partnered with us in so many ways, to make the Town a better place,” she said.

Religious leaders from the Muslim, Catholic, Hispanic and Jewish communities offered prayer and praise for the Town's spirit of inclusion of all cultures. “Together, we are one town. A Town that cherishes the fact that we are made up of a very diverse and multicultural population of more than 300,000 residents,” said Supervisor Carpenter. “We celebrate the fact that we are rich in diversity, embrace all that each one embodies, and remain committed to always be inclusive of all people, of all walks of life, and abilities,” she added.