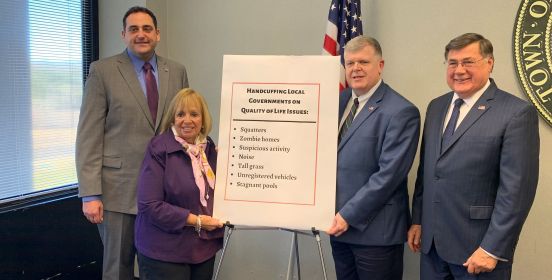 March 6th, 2020 – Facing delays in enforcement and growing caseloads due to over-burdened courts, the Suffolk County Supervisors Association, led by Chairman and Babylon Town Supervisor Rich Schaffer, came together to call on members of the New York State Assembly and Senate to pass legislation that would allow townships to adjudicate their own code enforcement cases, as well as reinstate anonymity for complainants. With townships setting up their own adjudication bureaus, the backlogged district courts would no longer be responsible for these cases.

Proposed by Assemblyman Fred Thiele and Senator Jim Gaughran, Assembly Bill 9108 and Senate Bill 7122 would provide townships with the authority to prosecute ordinance cases involving squatters, unsafe structures and other quality-of-life related issues. In addition, by allowing complainants to remain anonymous once again, residents will be able to report concerns in their community without worrying about retribution from neighbors.

“The strenuous mandate from the state in regard to the new discovery law has severely harmed our ability to enforce our own laws, placing an unreasonable burden on those who process complaints from our residents,” said Babylon Town Supervisor Rich Schaffer. “Towns need to be free to do what needs to be done to protect the quality-of-life of our residents and have the ability to prosecute those who violate our local laws without having to wait for the district courts to catch up. I thank Assemblyman Thiele and Senator Gaughran for taking swift action on this, and hope that their colleagues in the legislature see that reform is needed.”

Currently, state law allows municipalities with populations between 300,000 and 350,000 residents, as well as cities such as Syracuse and Yonkers and the Town of Huntington, the authority to establish administrative tribunals to streamline the adjudication of local code and ordinance violations. The legislation proposed by Assemblyman Thiele and Senator Gaughran would extend the ability to create such administrative bodies to all municipalities across the state of New York, no matter the population size. This change would recognize that the prosecution of local and criminal laws require two different approaches, with local municipalities being most qualified to handle the former due to their understanding of their own codes and the unique dynamics of the communities covered by them.

The enforcement of quality of life issues relies upon anonymous complaints from neighbors and concerned citizens. The discovery law as it currently stands removes this tool, stating that the identities and contact information of the complainant must be disclosed at or within 15 days of arraignment – no matter how minor the violation. This can discourage reporting of sometimes life-threatening violations or escalate neighbor disputes, as well as result in complainants being called as witnesses in any resulting trial.

“The Discovery Law changes adopted by New York State last year, without input from local governments, have resulted in a number of challenges in enforcing local ordinances. Clearly, they should have only affected crimes that are under the penal code, and not quality of life and other local codes. While Brookhaven is complying with the law, it has come at the expense of financial and manpower resources, and a loss of efficiency in addressing some complaints by our residents. I want to thank Assemblyman Thiele and Senator Gaughran for taking an important first step in correcting some of the deficiencies in these new laws. I hope the Governor and legislature further repeal these ‘reforms’ which have had significant unintended consequences impacting our residents,” said Town of Brookhaven Supervisor Ed Romaine.

“Our residents deserve to know that their Town is actively involved in enforcing the laws that maintain their quality-of-life and work to keep them safe. They should not be burdened with deciding whether to report a violation or face potential retribution, something current discovery laws make a legitimate concern. This proposal by Assemblyman Thiele and Senator Gaughran is exactly the type of common sense reform those who entrust us with the duty to govern expect to see, and I implore the New York State Assembly and Senate to see this as well,” said Town of Islip Supervisor Angie Carpenter.

Town of Huntington Supervisor Chad Lupinacci: “The State's changes to the discovery process amounted to a burdensome, unfunded mandate, adding layers of bureaucracy for local governments seeking to resolve code violations, restore public safety and improve quality of life for our residents. The Town of Huntington is fortunate enough to have had the State approve legislation enabling us to create the first Bureau of Administrative Adjudication, or tribunal for Town Code violations, on Long Island. Huntington's tribunal, which we expect to be operational by spring, will not be subject to the State's new discovery obligations, so residents in Huntington will be able to once again report code violations anonymously while the Town will be able to resolve these matters faster and more efficiently. I urge our legislators and governor to repeal the law as written and grant these other Towns the same opportunity given to the Town of Huntington.”

Town of Riverhead Supervisor Yvette Aguiar: “Local Town Codes and ordinances should NOT be held to the same discovery standards as the NYS penal law. Therefore, I request modification to the Reform Bill discovery stipulation requirement to exclude local town enforcement codes. Failure to do so will adversely affect our Towns and villages’ ability to manage code violations and quality of life crimes. As a former law enforcement officer, I can speak directly to the profound negative impact fear of reporting quality of life violations could have on our community. We also need to protect witnesses, complainants and local residents who may fall victim to Reform Bill discovery efforts.”

“The new discovery law handcuffs a Town’s ability to perform its most basic and critical functions-safeguarding the health, safety and welfare of its residents. The law unnecessarily and unreasonably burdens a Town’s ability to enforce its own local ordinances. It also has the chilling effect of discouraging residents from reporting a broad spectrum of violations ranging from threats, to human health and safety, to quality of life violations, out of fear of having their name made public for simply reporting a violation. The State must take immediate action to reinstate anonymity in reporting violations of local ordinances,” said Town of Southold Supervisor, Scott Russell.

“While we spent a great deal of time and resources adhering to the new discovery laws, allowing for anonymity is the single most essential component for our residents. Many of whom will stay silent and compromise their own quality of life, and welfare for fear of retribution from neighbors,” said Town of Smithtown Supervisor, Ed Wehrheim.